"The lotus flowers reds, white, blues, pinks and purples are all symbols of purity, enlightenment, self-regeneration and rebirth". 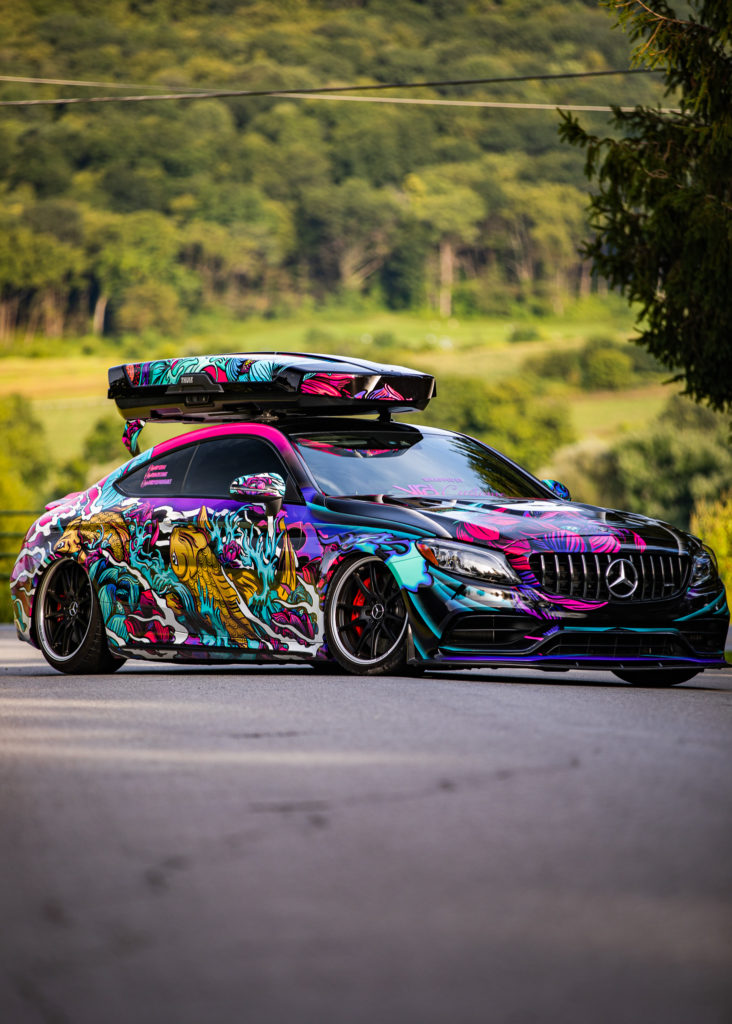 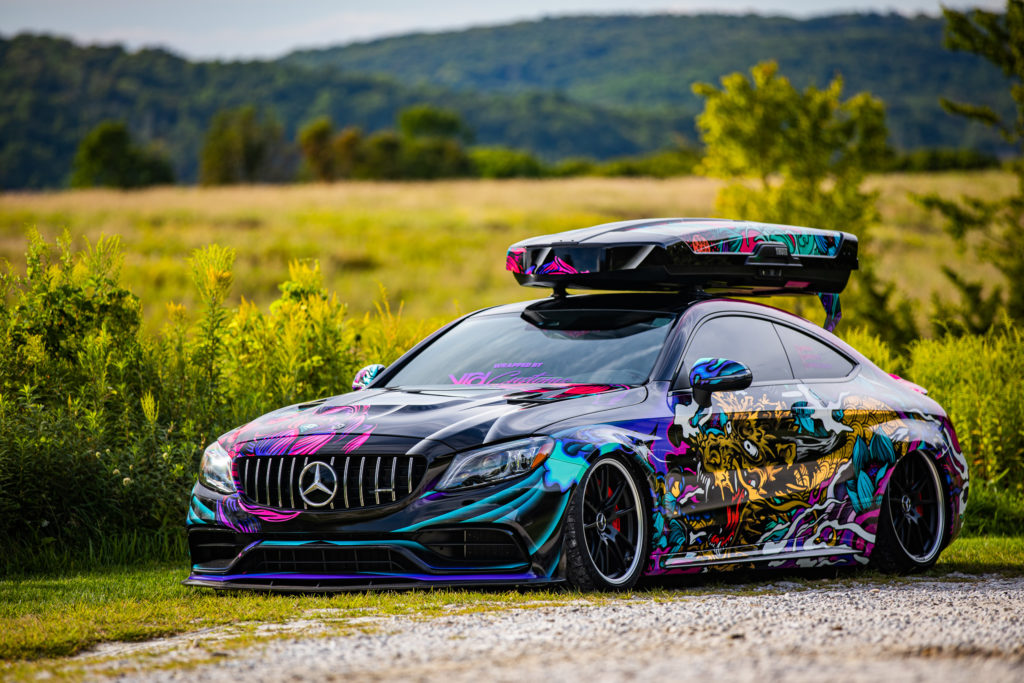 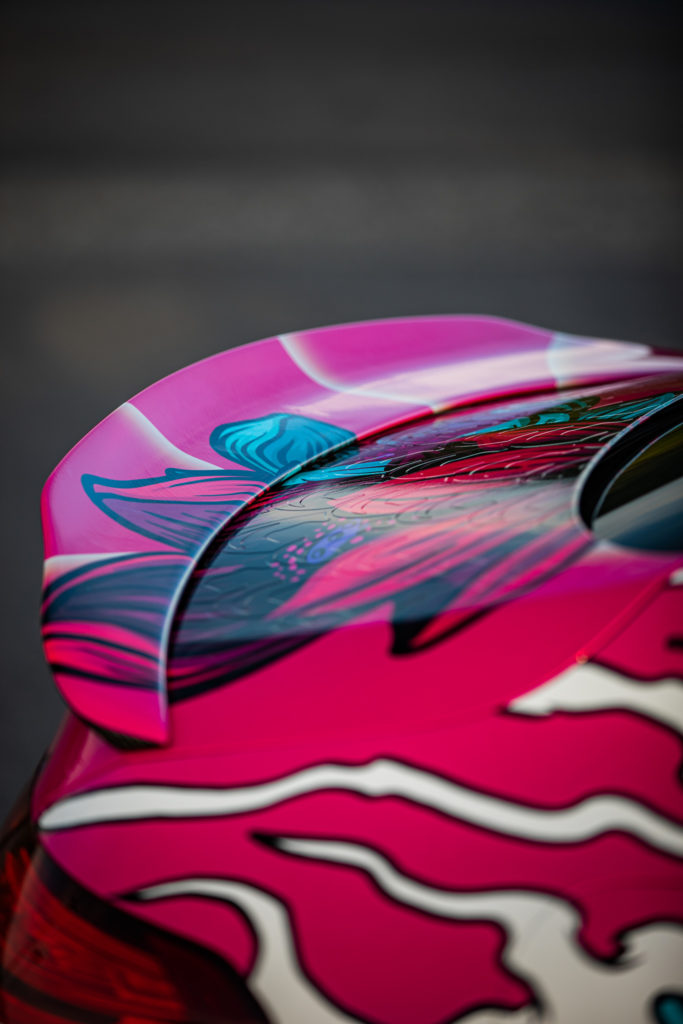 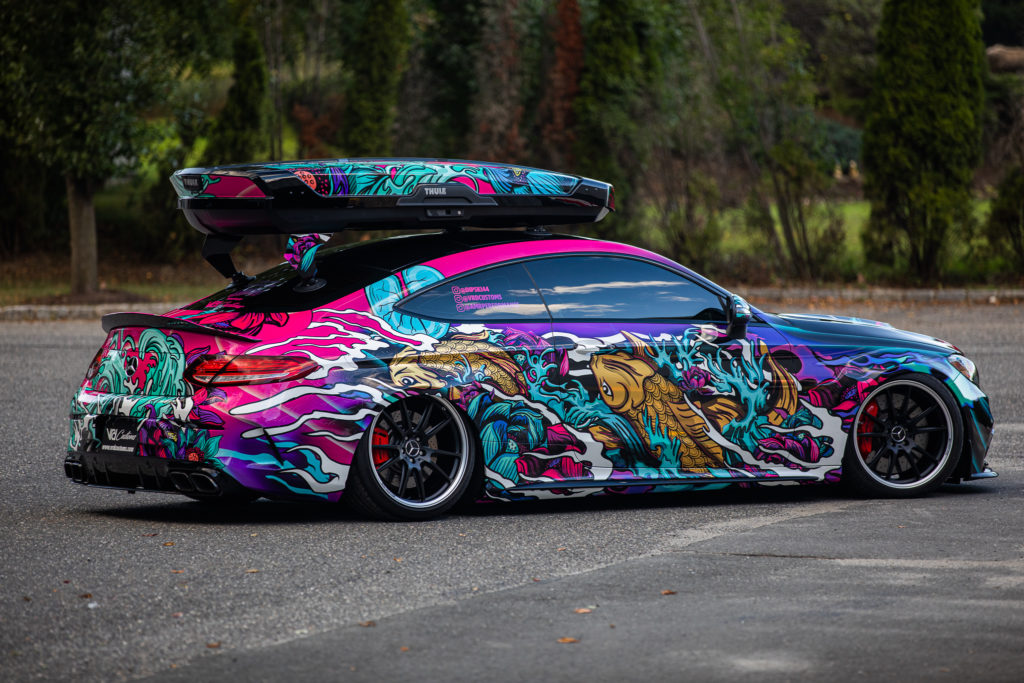 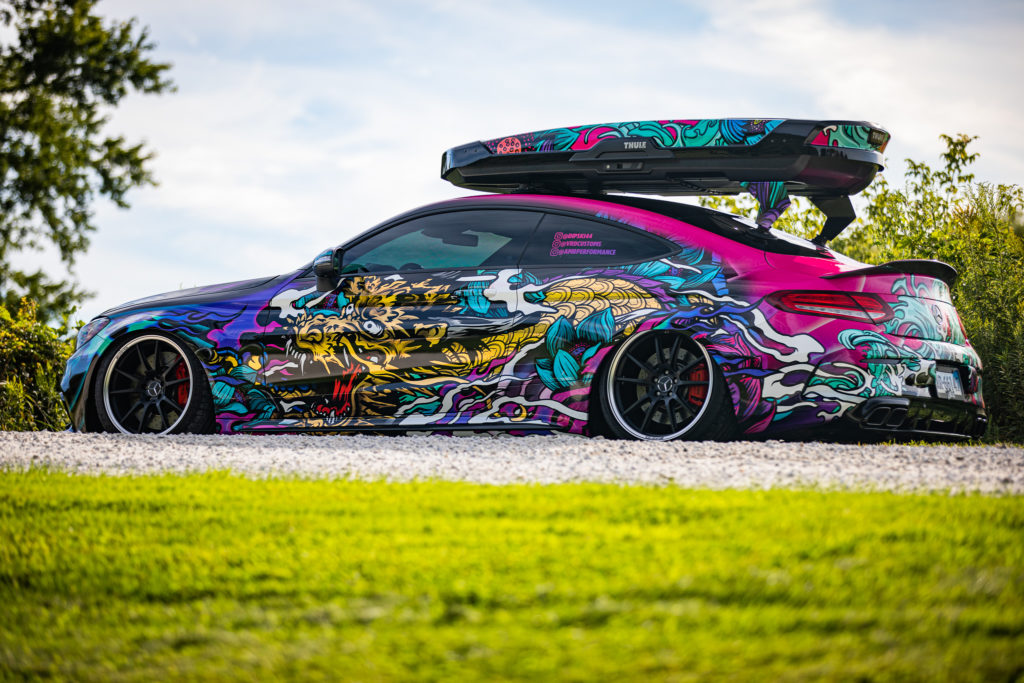 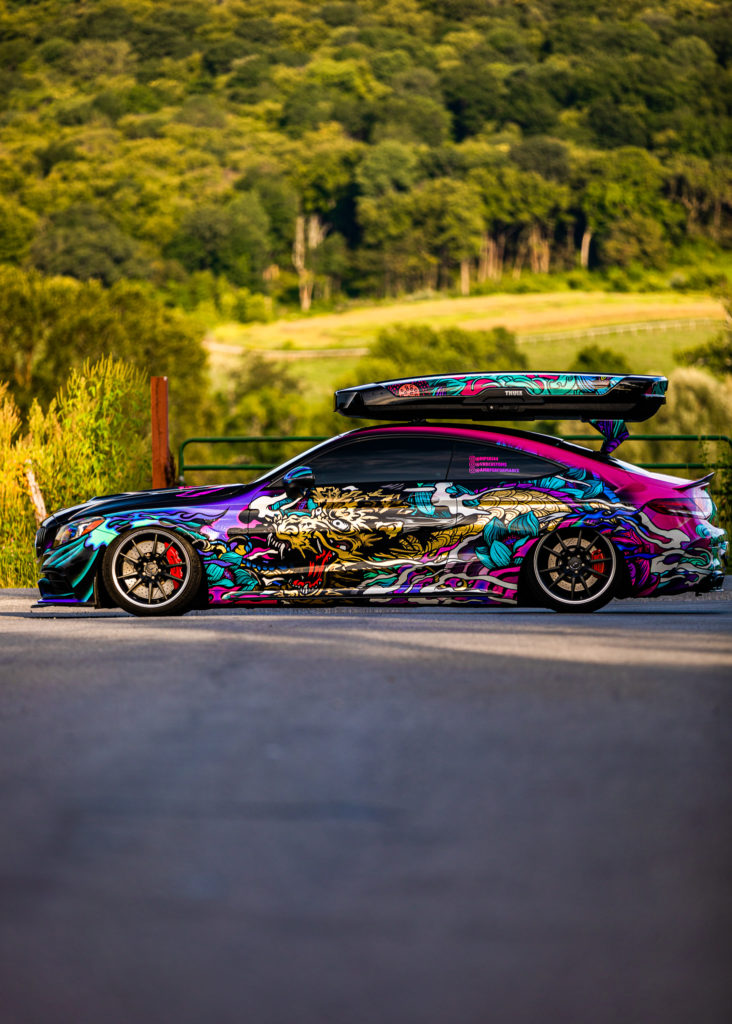 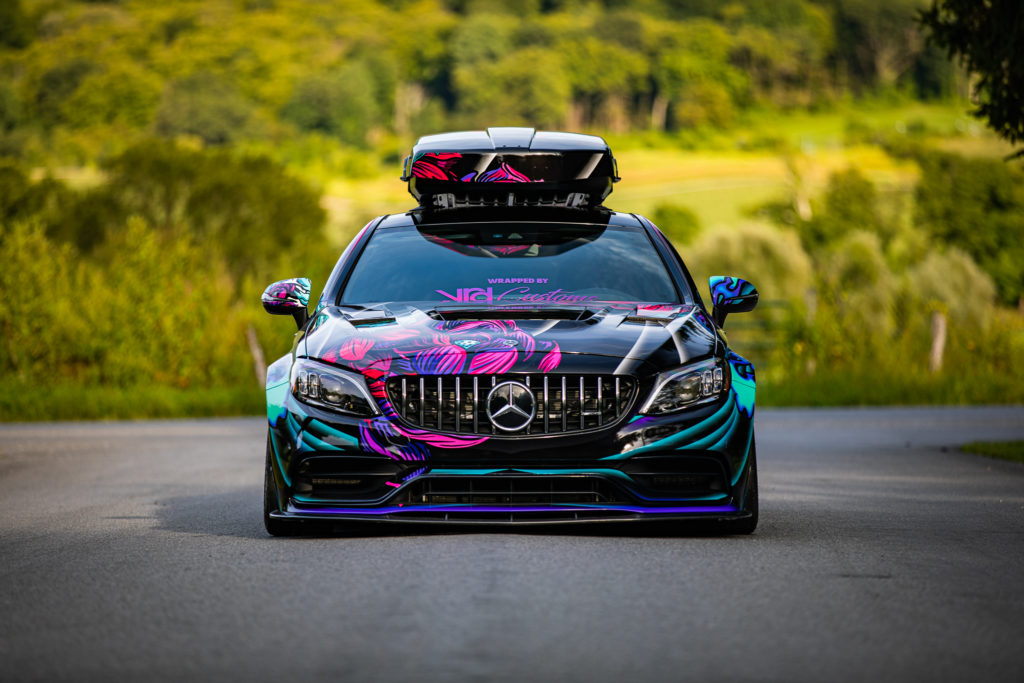 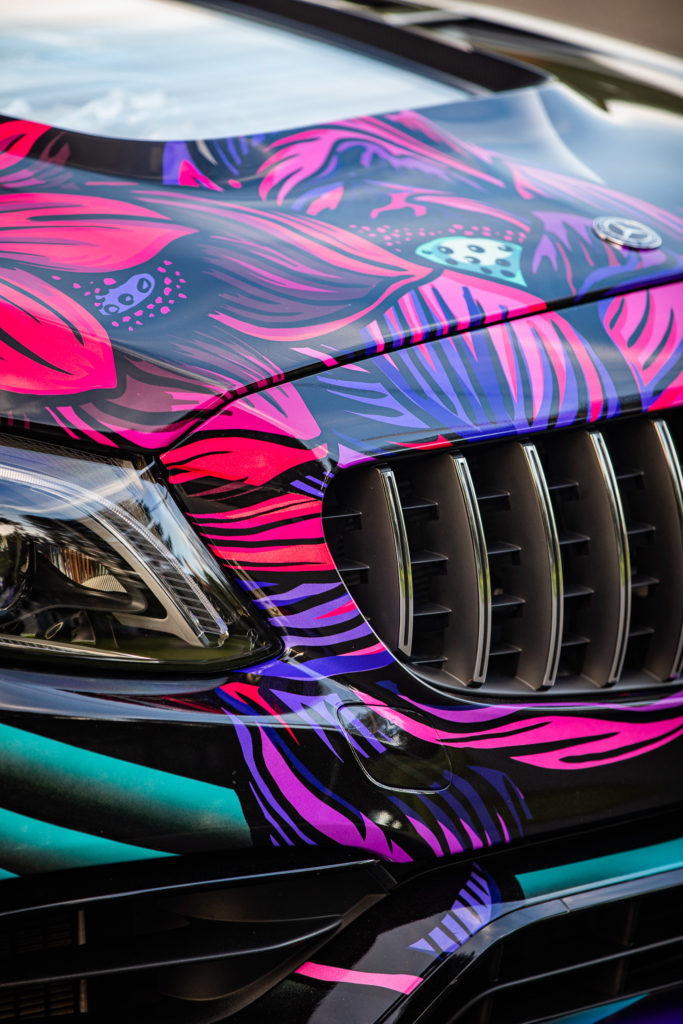 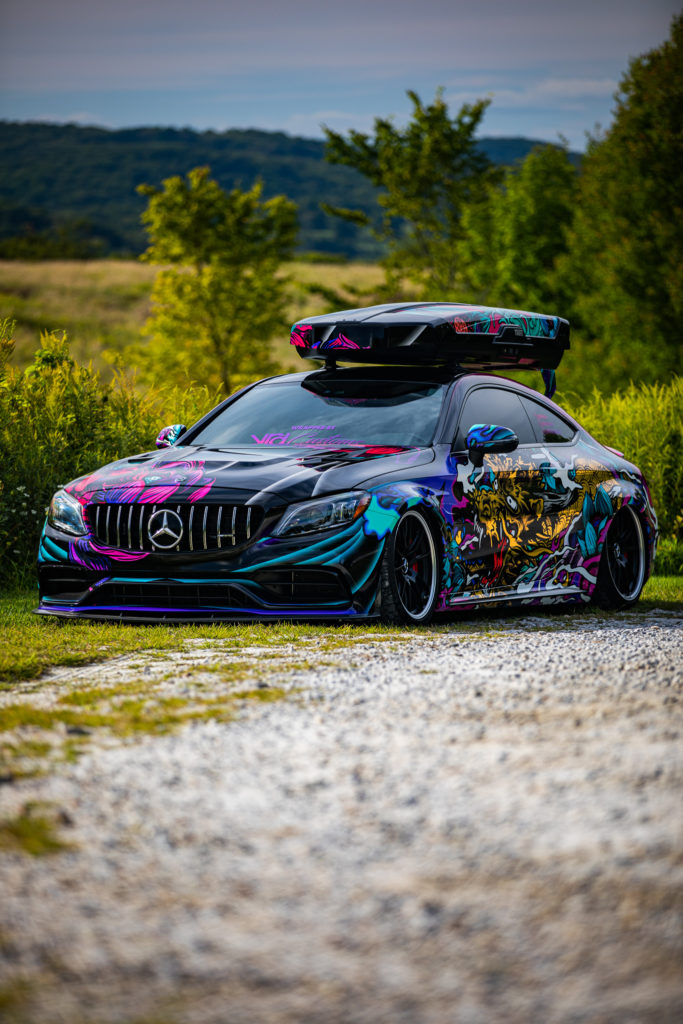 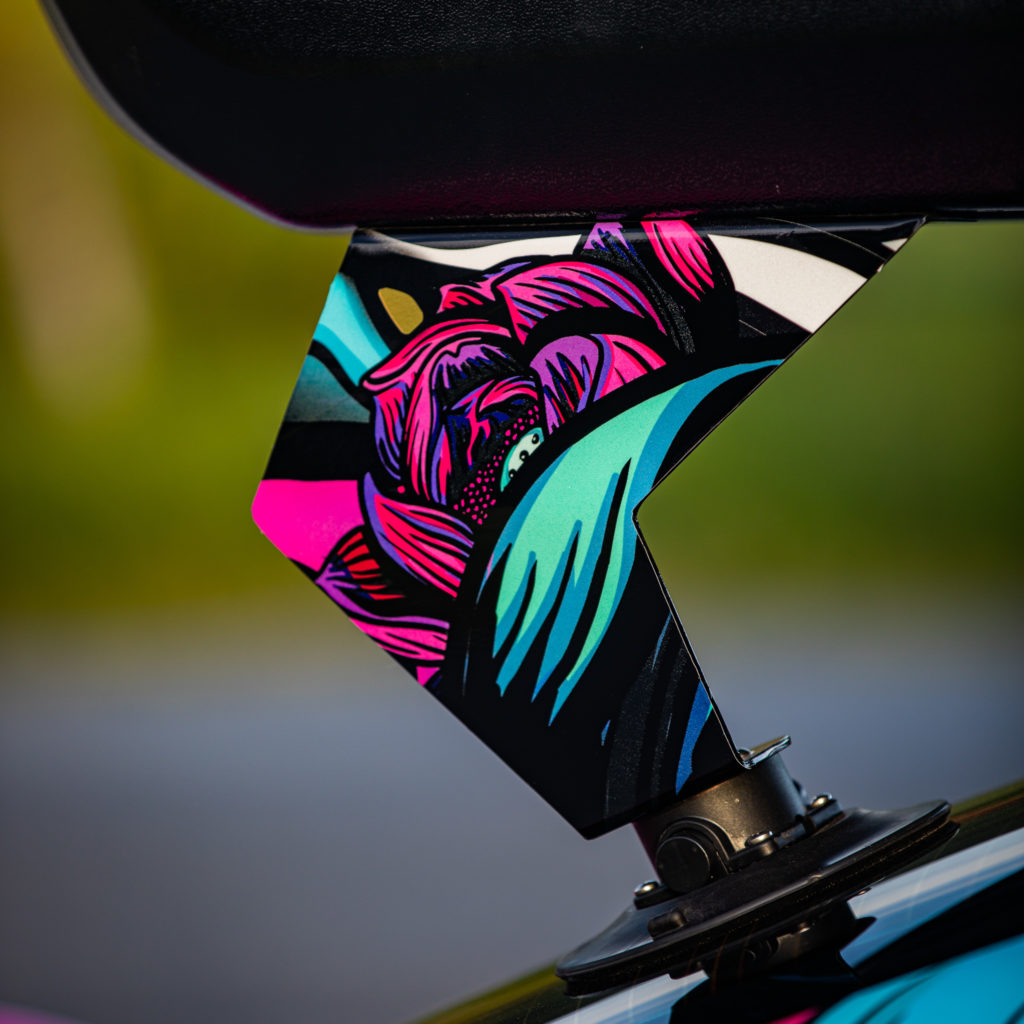 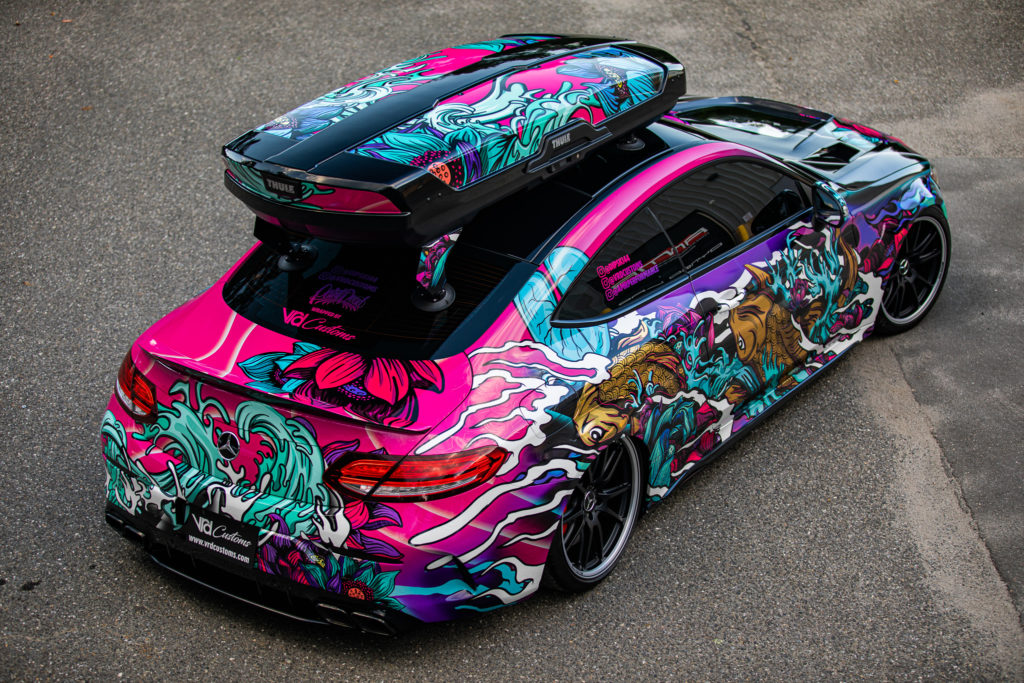 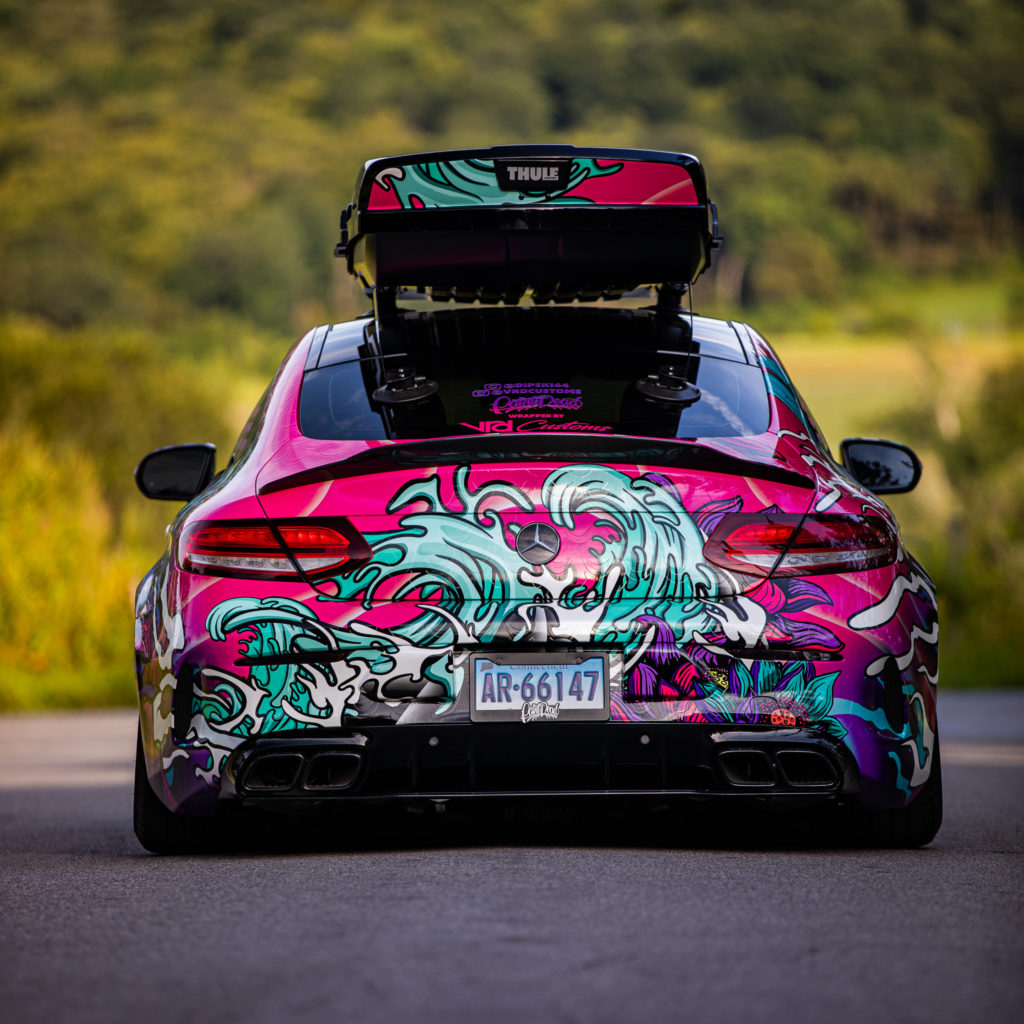 "Not just a wrap, read the story it tells".

To begin; we started off with one of our shop cars, which is a 2019 Mercedes-Benz C63S AMG that we previously installed a full clear bra paint protection on.  Given the thickness of the protection material that was already installed on the vehicle, we knew this could pose a challenge, but we were up for the task for this year’s Wrap Like A King.  We knew this year, we wanted to bring something different to Wrap Like A King. We wanted something special and unique, not just any chrome or themed wrap. Our goal was to have something that inspired and was meaningful. Our purpose was to tell a story and I already had a path in mind. Being a one-man installer, I called upon Scott Skepple to help me put my thoughts and ideas into a design. Due to our collaboration together in the past, I knew once I spoke with him about it, he would match my excitement for the project, and we would produce a design that was going to be one-of-a-kind. The inspiration path I had chosen for the design was an ancient tale of a huge school of golden Koi fish swimming upstream the Yellow River in China. Gaining strength by fighting against the current, the school glimmered as they swam together through the river. When they reached a waterfall at the end of the river, many of the Koi turned back, letting the flow of the river carry them away. The gods recognized the Koi for its perseverance and determination, were turned it into a golden dragon, the image of power and strength. 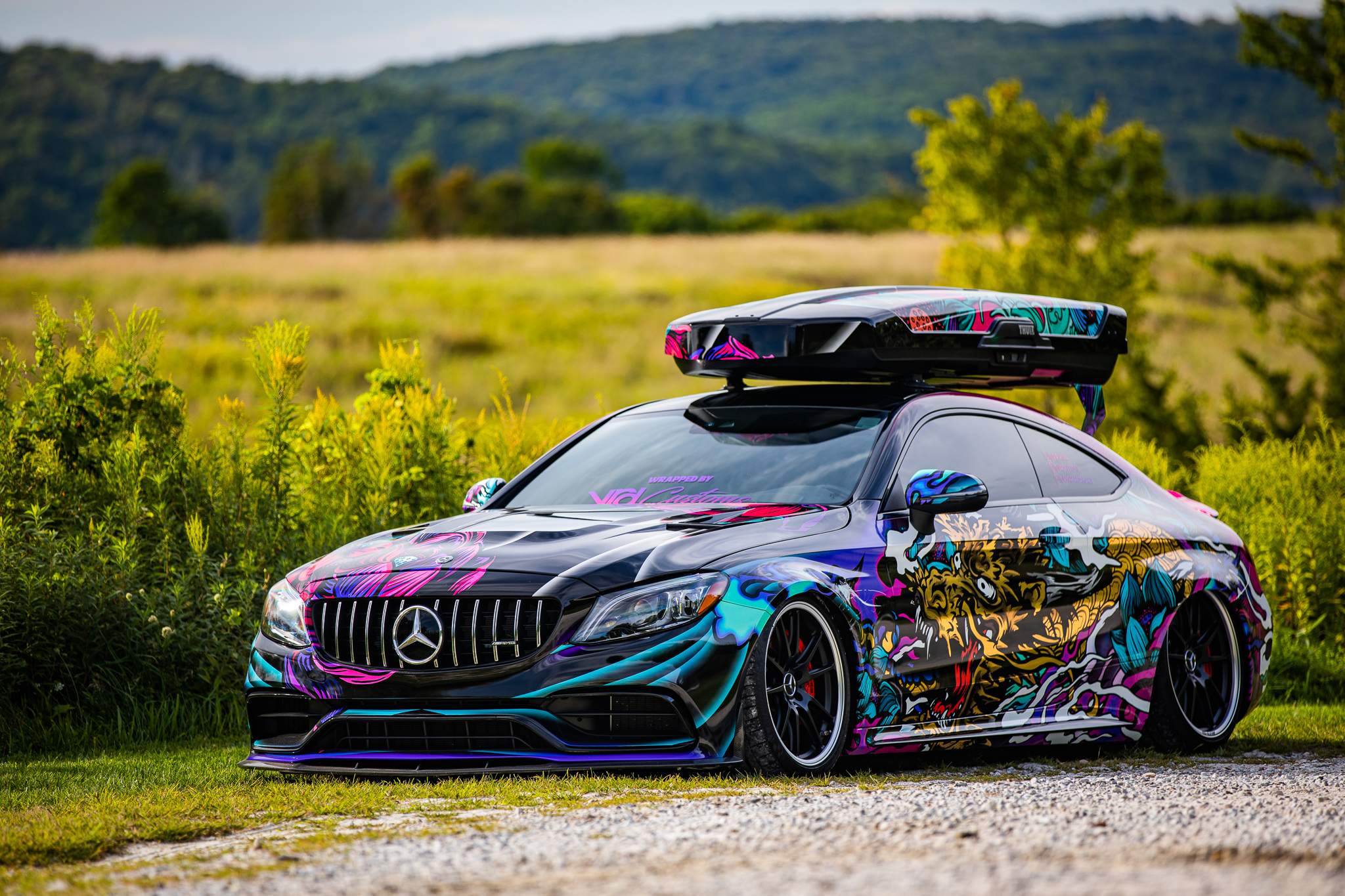 Perseverance
This story has inspired me personally which, anyone who has met me, would see this story as it is tattooed on my arm. The struggles to get through hardships of life and eventually become a dragon or a “wrap shop owner”. The unique thing about this story is that anyone can connect to it in one form or another. We all go through our struggles in life and our faced with our own personal demons. What I have learned is you just must keep pushing forward as you do not know what tomorrow will bring. As I discussed the Koi fish theme in detail with Scott, he told me he had a Koi fish tattoo as well! That sealed the deal for me as I knew both of us had a great understanding of the Koi story and being able to get personal with the design, would bring it over the top. Just like the colorful artwork on our bodies, I wanted this blank canvas of Mercedes-Benz to be the same.  We both decided that we would begin with wrapping the car in Avery Gold Chrome to really characterize the “Golden Koi Fish & Dragon” to its true color. The printing began! For the scales, details and shadows that would be a part of theme, I would be printing onto the Gold Chrome and installing it onto the vehicle’s panels. Layering this wrap would give it some depth and feel, so we took it one step further and die-cut scales in Avery Silver Metallic which I installed onto the rear quarter panels, full trunk and full rear bumper. This would give it some texture as well as show the connection of the two sides meeting on-to-one. Now came the challenging part. Figuring out how to plot the sections of the Koi fish and Koi dragon that would be in gold chrome and exposed underneath the layered wrap design. Due to the vibrant colors, I did not want to print on any standard gloss film. My desire was to stay true to the coloring of the Koi fish, Koi dragon, lotus flowers, lily pads and Japanese style waves. 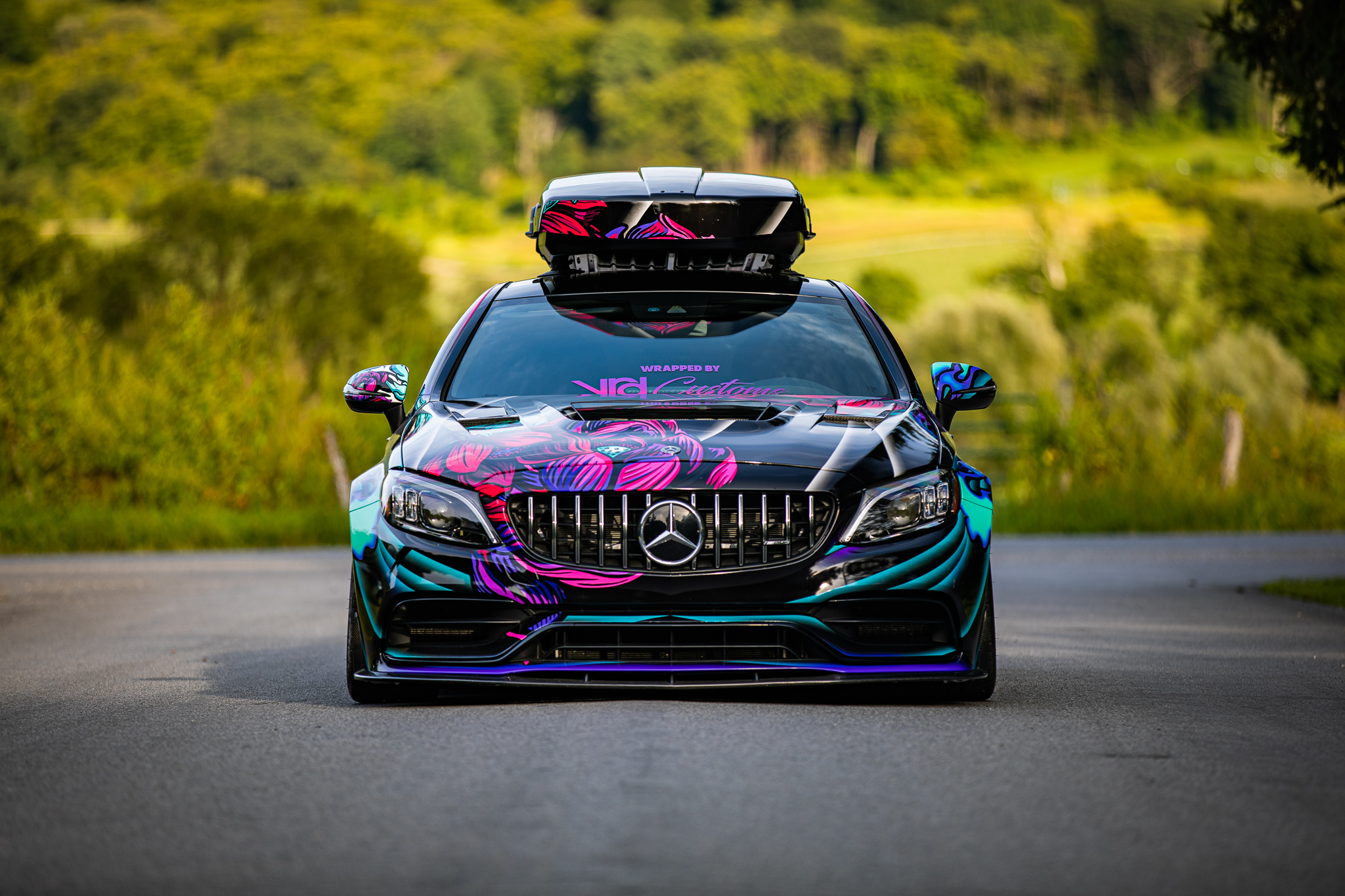 Determination
The lotus flowers reds, white, blues, pinks and purples are all symbols of purity, enlightenment, self-regeneration and rebirth. Even when the lotus flower’s roots are in the dirtiest waters, the Lotus produces the most beautiful flower. Our intention was not to take away from this, so I decided that printing on Avery Dennison Diamond White would be a perfect match to compliment the beautiful colors in the print and allow the design details to pop out. I started printing and plotting out the sections we had to remove. The most difficult part of the installation was lining up the top diamond print with all the shadows and details printed on the gold chrome below. Not an easy task. As I continued both the drivers and passengers’ sides, I had to make sure the alignment was perfect throughout the vehicle body panels. The story starts on the passenger side where you will notice the Koi fish swimming against the current brushing through the beautiful symbolic flowers trying to reach the waves and waterfall located on the rear. As one reaches the waterfall, it then brings you to the driver’s side where the golden Koi dragon emerges. While the theme was nearing completion, I decided to add a little bit of spice. I flowed the wrap theme onto the new true carbon fiber hood with transparent glass center showing off the vehicle’s turbochargers and as incorporating the wrap throughout the lid of the Thule ski-box for the extra effect! This combination gives the vehicles the performance look while still having that show car feel. The difficult level of this type of design and install was truly a team effort. We hope this wrap and the story it tells will inspire those to continue towards their goals and never give up. Swimming against the current is life’s troubles and hurdles but through hard work and perseverance you can become a Koi dragon because you never know what tomorrow will bring! 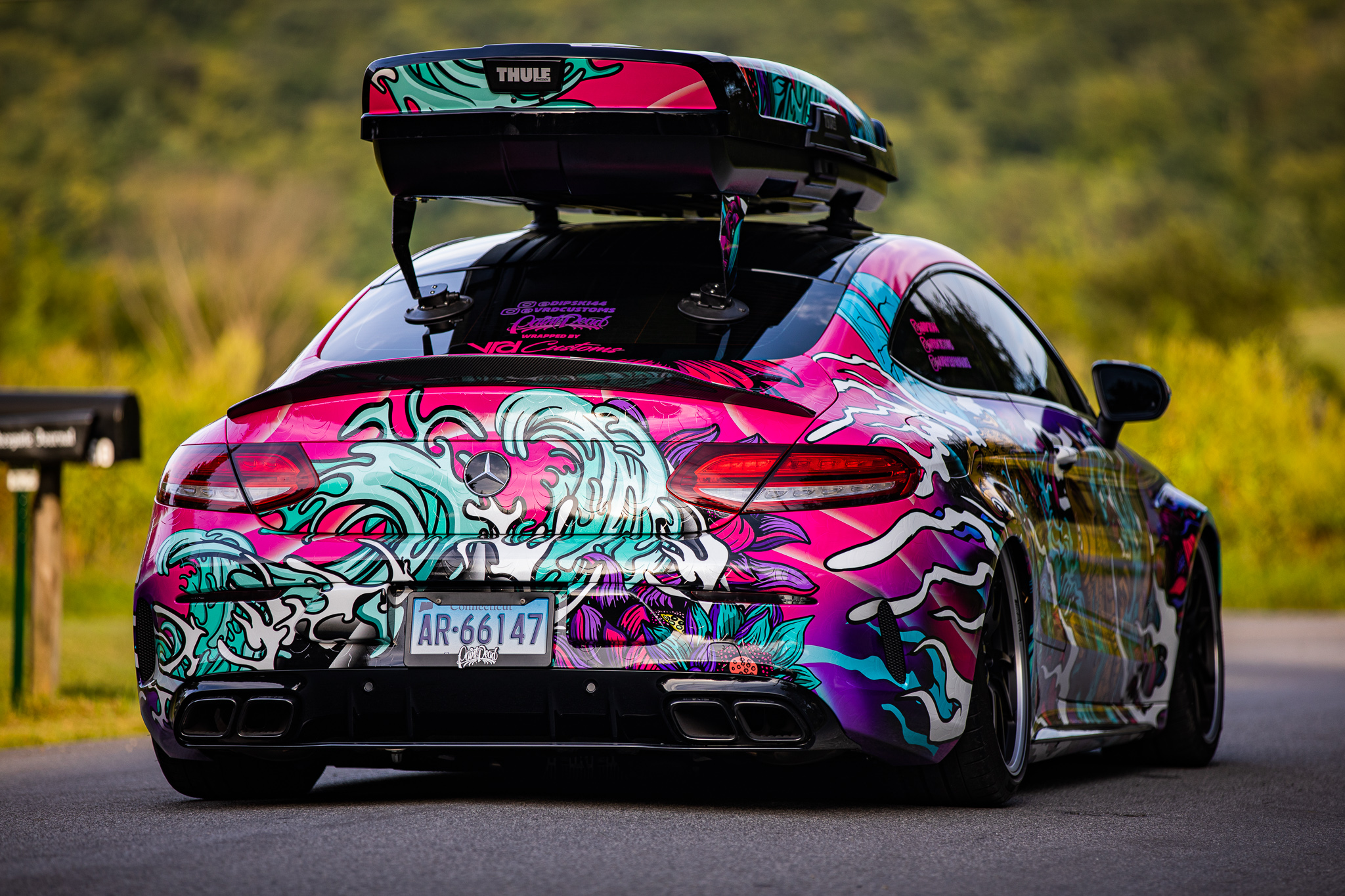 "The gods recognized the Koi for its perseverance and determination and turned it into a golden dragon, the image of power and strength.".